If you are a beginner astronomer you may have heard of myriads of features of different telescopes and you are already confused about which one will be the best for you. At first, you have to know what the differences are between a reflecting and a refracting telescope.

Refracting telescope is one of the earliest designs of telescopes. It was first unsuccessfully designed by Hans Lippershey in the Netherlands about 1608. One year later in 1609, Galileo made his own refracting telescope and he was successful to use it in astronomical observations.

However, in short, it has a tube and two lenses inside of it.

The right side has the larger lens which is basically the objective lens. This lens is the one that gathers the light. The larger the objective lens will be, the more the light will be gathered and the better the image of the telescope will be. A larger objective lens enables looking deep into the sky. It also allows you to magnify the objects more and get a closer look at the distant objects.

Working Principle of a Refracting Telescope

We know that glasses bend the light passing through them. Lenses also bend the light in the same way but the advantage here is that lens can collect a large amount of light and bend them concentrating into a smaller area. This is exactly how our eyes work to see any object. Assume that a telescope is just a large eye gathering thousands of times more light than the human eye.

Lightpath through the tube of the refracting telescope:

Fig 2: Lightpath through the tube of reflecting telescope

In the figure, we can see that the light that comes through the objective lens is bent by it. Interestingly, the further the light goes down the tube, the smaller the cone of refracted lights becomes. Once the refracted lights intersect each other, the cone starts to get bigger again. In this stage, the image of the object you see through the telescope gets inverted.

Any object you want to see by a refracting telescope, you in fact see an inverted image of that. It does not affect that much if you see any distant night sky object. But if you want to look at any terrestrial thing, you will find it a bit uncomfortable.

Later, an amazing method was invented by Chester Moore, an English barrister in 1733. He used several elements to make a single lens that resolved chromatic aberration as well as offered small focal lengths. Basically, here two pieces of glass named ‘Crown’ and ‘Flint glass’ with different dispersions were used to make the objective lens. Both the side of the glasses are polished and ground properly and then they are assembled together. This lens is finally called ‘Achromatic lens’ as it efficiently solves the problem of chromatic aberration and spherical aberration as well.

Fig 3: Lightpath through the achromatic lens

The figure shows that the light coming from the light is bent by the lens to the left. The two different glasses cancel the chromatic aberration of each other and balance and finally create an image of perfect color.

How to make a refractor telescope on your own 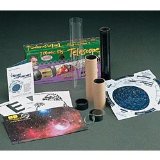 If you want to make your own telescope you just can visit amazon or Walmart for getting homemade telescope kit. The kit includes the lenses, tubes and more which are enough to make one by yourself. If you just follow the instruction manuals it will become easier. Children of more than 8 years can do this amazing fun activity at their home too. This can be a great gift for anyone of any age.