This article will take a look at telescope mirrors. Show you how they work and explain all about them.

A telescope mirror is not the same as a regular mirror. It is significantly different and it is a high precision piece of scientific apparatus that has been carefully made to specifications within less that a thousandth of an inch. It is actually a remarkable feat of manufacturing and although it is quite exacting it is also within the reach of an amateur to make one without too much expense. Telescope mirror making in the 50’s and 60’s used to be quite popular and many people undertook the task for several different reasons. First, simply for the fun, enjoyment, and challenge of it. And second because purchasing one was rather expensive and out of the reach of many people. So, if a person wanted some type of reflector telescope but couldn’t afford one they could actually make on.

The picture above are of two telescope mirrors. The mirror on the left
has a diameter of 4 1/4 inches and the one on the right is 8 inches.

Nowadays, the cost of manufacturing a professional quality telescope mirror has gone way down and you can purchase one at a very reasonable price. It is to the point where grinding and making your own mirror often will cost more than purchasing a whole telescope! But, this still brings us back to the first reason for making a telescope and your own mirror: For the fun, enjoyment and challenge of it.

A Look at Telescope Mirrors

There are a few different types of telescope mirrors and we will take a look at the two most popular and frequently used kinds. These are the Spherical and the Parabolic.

This picture here shows a spherical Mirror. You can visualize it by thinking of a perfect sphere like a crystal ball or a marble. In the picture the sphere is red. The telescope mirror at the bottom is flat on its bottom but the top of the mirror is exactly shaped to the curve of the red sphere. This causes the light rays that come to it to be bounced up and at the focal point in the middle of the sphere.

This spherical mirror surface is relatively easy to make but it does have some problems. the light at the edges of the mirror will be bent slightly different than at the center. This causes something called Spherical aberration. It will cause images to be slightly incorrect and the pinpoint stars will not be seen as pinpoints, they will be fuzzy.

The parabolic telescope does not need any of the correcting lenses but this type of mirror is much more difficult to manufacture. The parabolic telescope takes the spherical primary and re grinds it into a parabolic shape which corrects for the aberration. The total surface of the mirror is reconfigured in a way that all the light rays focus to the same point. This type of mirror is more expensive to make but it is a simpler telescope.

This picture compares the differing shapes between a sphere and a parabola.

The History of Telescope Mirrors

Generally the concept of inventing the telescope mirror is credited to a man named James Gregory who invented the concept of a telescope with a mirror rather than a lens in 1663. He didn’t however accomplish building a working model. Although Robert Hooke did successfully build a Gregorian telescope about ten years after Gregory announced it. . The first workable telescope with a mirror was made by Sir Isaac Newton in 1668. This is the famous Newtonian Telescope. I have a picture of this actual telescope and more about it here: Sir Isaac Newton’s telescope

Reflector telescopes come in two different types. The first type is the single mirror type where a single piece of glass is cast and polished to make the primary mirror. The second type is the segmented mirror where a series of hexagonal mirrors are assembled together into a single large mirror. This type of mirror looks much like the honeycomb from a beehive and this new technology is allowing telescope makers to make instruments larger than ever imagined. 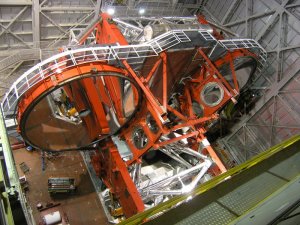 The largest single piece of glass telescope in the world is the Large Binocular Telescope (LBT) in Arizona. It is a telescope composed of two separate mirrors that are side by side and work in tandem. The light from both of them are blended into one single image. Each mirror is 8.4 meters (330 inches) in width and when used together they create the equivalent of a mirror that is 11.8 meters (464 inches) across which is currently the largest light collecting size on Earth. It is located in Mount Graham International Observatory in Arizona.

Segmented mirrors pose technology challenges that have been overcome in the past decade and now these multiple mirror scopes are being built in extremely large sizes that cannot be rivaled by single piece mirrors. Of the segmented telescopes where a series of honeycomb shapes are assembled together into a single telescope there are three different observatories with these largest of mirrors.

The Image at left shows a segmented mirror. This illustration is of the James Webb Mirror as compared to the Hubble Mirror. Image Courtesy of NASA

The South African Large Telescope (SALT) is the largest primary mirror scope in the world and it has a segmented mirror that is 11 meters (433 inches) across.

The Gran Telescopio Canarias or GTC is located on the island of LaPalma Spain and it has a segmented primary mirror that is 10.4 meters in diameter (409 inches). 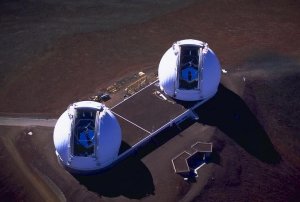 The Keck Telescopes are a pair of telescopes located at the Keck Observatory in Hawaii. Each mirror is ten meters (400 inches) in diameter.