How Newtonian Telescope Changed the View of the World 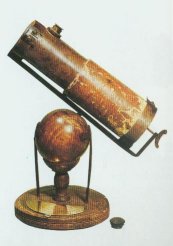 We all know that the Newtonian telescope did not contribute to discovering any new celestial objects, but it did change our view of the universe. Here we will focus on this popular telescope and some other discoveries of one of the greatest scientists Sir Isaac Newton.

Sir Isaac Newton, the greatest Mathematician and Astronomer of all time made tremendous contributions to various fields of science including the development of telescopes. In his days, refracting telescopes were used for various experiments. As these refracting telescopes used lenses, it could bend light and magnify images to multiple extents. But it had some optical problems named chromatic aberration which means the distortion of color. For this problem the images from the telescopes became fuzzy.

Newton was not the first one to come up with the idea of using mirrors instead of lenses in the telescope. He made a reflecting telescope with a mirror to conduct experiments on his theory of white light being a mixture of spectrum. And this invention changed our understanding of the universe completely overnight.

To understand the problems of refractor telescopes, we have to understand how a rainbow is formed or what happens in prism. We all know that when light travels through two different mediums, it bends. Another characteristic of light is when it passes through a glass, different colors of light bend at different angles as their speeds are different. This gives rise to the problem of chromatic aberration making an outline of undesired color along the edges of the objects in an image or photograph. Finally, we get distorted views of the object we see through the lens.

Here, one thing to keep in mind is that, we can make lenses that cause almost no chromatic aberration now. But at the time of Newton this problem was not resolved yet, so they had to consider this problem while using them for making mechanical devices like telescopes. Besides, our lens can be without chromatic aberration, but we cannot use bigger glass lenses. Because large lenses cause heavy weight and its own weight distorts the lens and makes a fuzzy image.

This is why Newton applied the idea of Galileo and used a mirror in his telescope and avoided this problem. A mirror reflects the light, so no distortion happens. Besides, you can make mirrors as large as you want. Because you just need to reflect the light off the surface you want to place the whole mirror on a base which can bear the weight of the mirror. Using this method, we can make a telescope without any distortion.

Another advantage of the Newtonian Telescope was that it was simpler and less expensive than the other available telescopes at that time. It was easy to find a short focal ratio which gave a wider field of view. Besides, as the eyepiece is mounted at the top of the telescope, overall it allows a compact mounting system which reduces cost and makes the telescope more portable.

Here, we have to be clear on the fact that Newton did not invent the first reflector telescope method. It was the Italian Monk, Astronomer and Physicist Niccolo Zucchi who invented it and made a reflector telescope in 1616. Later, he published a book on Optics in the year 1650 where he described his method. Sir Isaac Newton read this book and applied this method to make his own reflector telescope. Newton completed this work in 1670 much later than Zucchi’s. Yet Newton’s telescope became famous because Zucchi’s telescope had some other problems and could not work well. Newton’s telescope gave amazing discoveries which made it well known and was displayed to the Royal Society in 1672.

Like other scientists, Newton did not focus on discovering celestial bodies at that time. He worked on something more important, that changed our view and understanding about the universe. He connected mathematics, physics and astronomy by his theory of gravitation which he proved using his telescope. He showed mathematically that gravitation was always a two way operation like while earth is pulling a falling apple, the apple is also pulling the earth. By his telescope he proved that the planetary system follows this same gravitational theory. Planets move around the sun just for the balanced two way operation of Gravitational force between them. This discovery became well accepted and very famous along with the Newtonian Telescope. 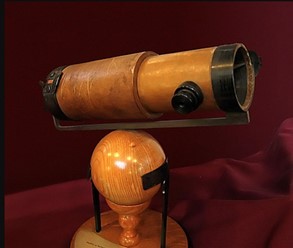 The actual telescope that Newton himself built and used still exists and now it is in the custody of the Royal society of London and sometimes they take it to different parts of the world for exhibition. 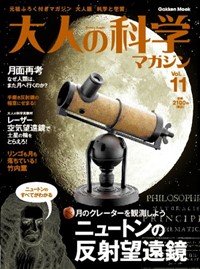 The figure shows a real replica of a Newtonian reflecting telescope which you will find easily in Amazon. It has 10x magnification power and it looks great with its own base. Though the instructions are written in Japanese language, it is really easy to build by hand following only the step by step pictures given in the manual.

The Newtonian telescope has some limitations too. As it uses parabolic mirrors, it creates comatic aberration that creates a comet-like tail in the distorted view of stars. However, it was a revolutionary invention that changed the base of astronomy.