The Universe is a lot bigger than we think! 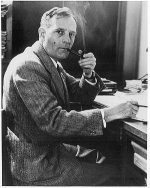 You have probably heard of the Hubble Telescope. But you might not know much about the man it was named after. His name is Edwin Hubble and it is very fitting that they named the Hubble Space Telescope after him. I will outline this for you in this article.

Up until Hubble the Milky way galaxy was thought to be the whole universe and it had everything in it. But Hubble, through observation and analysis proved that the Milky Way Galaxy was just one spiral galaxy amongst many more. And these many more were separate entities unto themselves. So, , in effect, he expanded the size of the universe!

And this new understanding of the size of the universe is one of the perfect reasons why the Hubble telescope is called the Hubble telescope. The following image shows you what I mean. This is the Hubble Deep Field Picture. It is a composite of pictures that were taken over the course of ten days by the telescope. They pointed it at an empty patch of sky to see what they would get. This image is often considered to be one of the most profound images ever taken. Those lights in the pictures are just about all galaxies.

Red Shift and Hubbles Law – Through observation and analysis he determined that the greater the distance between any two galaxies the greater their relative speed of separation. This is called Hubble’s Law. This was important support for the theory of an expanding universe and the big bang theory.

No modern astronomer made a more profound contribution to our understanding of the cosmos than did Edwin Hubble, who first conclusively demonstrated that the universe is expanding. Basing his theory on the observation of the change in distant galaxies, called red shift, Hubble showed that this is a Doppler effect, or alteration in the wavelength of light, resulting from the rapid motion of celestial objects away from Earth. In 1935, Hubble described his principal observations and conclusions in the Silliman lectures at Yale University. These lectures were published the following year as “The Realm of the Nebulae,” which quickly became a classic work. Available on Amazon.com: The Realm of the Nebulae (Silliman Memorial Lectures)

Another Book
The observational approach to cosmology, That is a link to it on amazon.com but it is a difficult and rare book to get. You can download a pdf of it on the caltech website here

Trivia – In 2008 The United States Post Office issued a stamp in his honor: