Binoscope is the short form of a ‘binocular telescope.’ Binoscopes are used to view the night sky, especially by beginner astronomers. You can see through the telescope with only one eye. But a binoscope is the arrangement of two telescopes with one for each eye. According to the structure, they are really like binoculars, but bigger ones look like joined binary telescopes. In fact, they are built by joining two real telescopes.

Norman Butler is an astronomer and is well known for his contribution to making binoscope. He is a famous author of books on binoscopes as well. He won several awards for his unique design of binocular telescopes. He started working in the electro-optical engineering field for AVCO Everett Research Laboratory at the Haleakala Observatory situated on the island of Maui in the early 1980s. There he used to build electro-optical equipment for 1.2 and 1.6 M telescopes.

He graduated from San Diego City College and pursued higher studies, including a Ph.D. later. He was in the US Navy working as an Opticalman on submarine tenders throughout the 1960s. His job was to repair submarine periscopes and optical navigational equipment. After he had 20-year experience in electro-optical engineering, Norman became a joint-venture manager in the electronics industry in China in 1994. He became a resident of Hong Kong in 2004 and started teaching at Harbin Institute of Technology, Shenzhen Polytechnic College, and Shenzhen Graduate School. Finally, after he had retired in 2012, he started living in the Northern Marianas Islands to enjoy stargazing and watching the deep sky objects with his binoscopes.

Here we will present the designs of some of his binoscopes and published books. 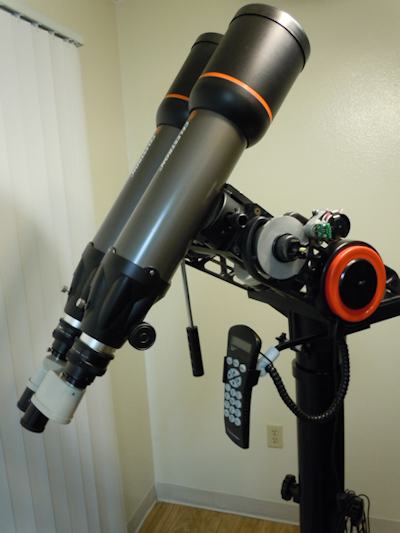 The picture presents one of Norman’s customized binoscope, which was featured in Astronomy Technology Today Magazine. It uses double Celestron 102-mm f/6 refracting telescopes with a GOTO drive. This setup is easily adjustable despite having two telescopes because Norman used Microscopic eyepieces instead of traditional diagonals. This allows him the right orientation. As the main part of the mount, Norman used a binocular platform and Lumicon Universal pier. He also modified the mechanical and electronic parts of the single telescopes extensively to make this extraordinary thing.

The Book ‘‘Building and Using Binoscopes’ 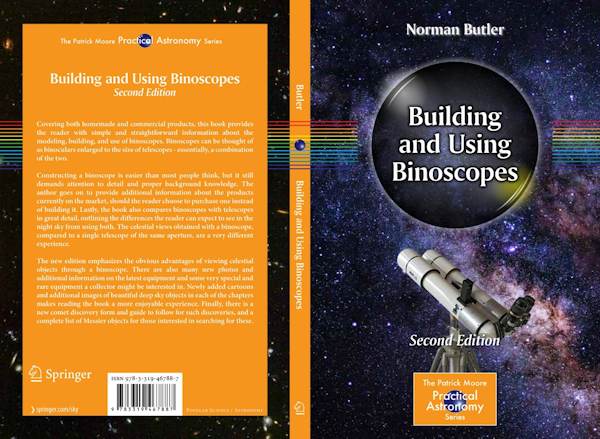 Fig 2: Cover art of the book ‘Building and Using Binoscopes’ by Norman

His popular best selling book on binoscopes is named ‘Building and Using Binoscopes’. Second edition of this book has been published in 2017. You also can visit the Springer publisher website or amazon for more information on the book.

This book covers all the easy-to-understand information about the products homemade or commercial needed to design and make binoscopes. The author thinks if anyone has proper background knowledge, he can make his own binoscope with simple products. This book also describes the differences in the experiences of people using both the single telescope and binoscope. Norman added enormous photos of deep sky in each chapter and a long list of different sky-objects.

Norman tells us about this new edition:

” ….It contains a lot more updated info on binoscopes, binocular telescopes, big binoculars and many beautiful images of deep sky images and homemade and commercial binoscopes.  If you want…you can include that attached image of the new book cover on your excellent “The Telescope Nerd” website.  My first edition Springer book of the same title is still out there in the astro-book market place and doing well since it was published in early Nov. 2014. 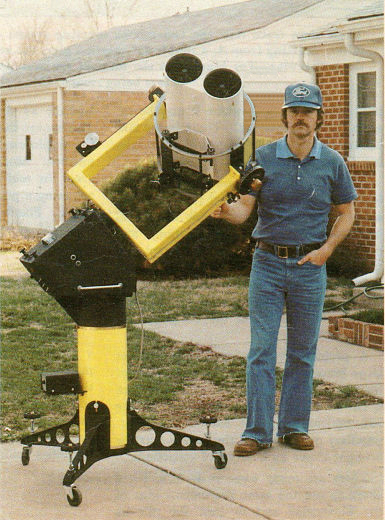 Norman made a 6 inch f/15 Cassegrain binocular in 1980 which got the Engineering Merit Award in 1981 at Riverside Telescope Makers Conference (RTMC). It is also known as Dall-Kirkham binocular telescope having 10 mirrors and clock drive equatorial mount 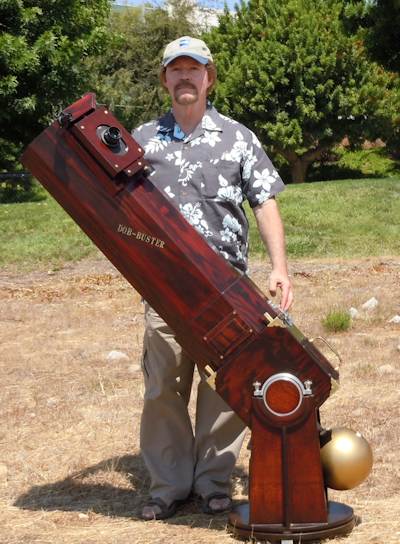 Norman completed making a 10 inch f/4 Dob Buster in 2010 and it was featured in various magazines like S&T/Astronomy & Astronomy Technology Today and even in some books. According to Norman this telescope was the most popular homemade telescope he built till then. Though the design of this telescope was based on the classic Dob, he later modified the features a lot, for example, he increased the bowling ball counterweight and the height and so on. 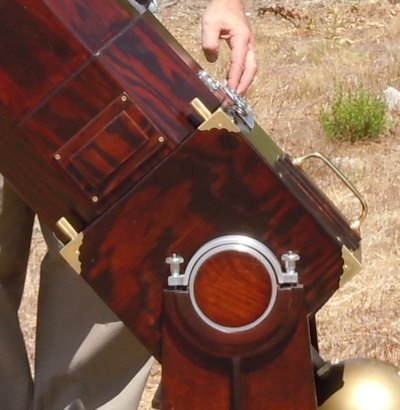 The main mirror of this binoscope can make rays of light or particles accurately parallel. There are a total of four big gold knobs just like the picture above, three of which are used to adjust the mirror and the last one locks the mirror in the right place. These knobs are the unique things Norman used in this binoscope. It is really surprising how the knobs move the mirror properly!

Fig 6: The arrangement of the three knobs

The knobs are attached with the pulleys just like the picture shown above. 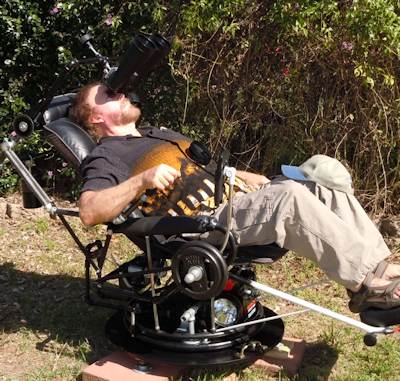 Imagine a chair which automatically moves according to the target object of the night sky. This incredible thing is also designed by Norman. Once you set the standard star alignment, this binocular chair can spontaneously turn to any of 40,000 night sky objects.

He took an Ikea chair to design this unbelievable chair and modified some features and one of the custom modes. This chair does not take the feet of the observer too high up in the air because it does not pivot completely like the other binocular chair. The drive system includes pairs of motors from Celestron Nexstar 4SE Telescopes.

Here we are adding some other books on using binoculars for sky-observation.

We all know that binoculars can be used to see objects further apart. Binoculars are not considered as a tool for serious observation. It is a beginner level observing instrument. But it gives much ease to the eyes when you observe something with your two eyes. For this exact reason, binocular users like to enjoy the skyview with this as it offers more comfort.

Binocular Astronomy 2nd Edition enthuses the amateur astronomer to understand binoculars and their use with the latest development on binocular technology.

This book covers all 109 deep sky objects can be seen by a binocular which includes galaxies, glowing clouds of gas, star clusters and more. A star map is added there to plot the star easily by using binoculars.