One of the most respected manufacturers of telescopes

If you are looking for quality and a company with a very long track record of making top of the line telescopes then you are looking for a Celestron telescope. Here is a selection of some of their telescopes that you can purchase through amazon.com. They run a large range of telescopes from basic and simple ones for beginners to observatory quality instruments. I have arranged these telescopes roughly by cost from the least expensive beginner scope to the more expensive professional quality or serious amateur scopes. 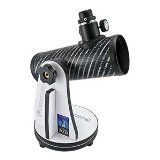 Celestron 21024 FirstScope Telescope – FirstScope Telescope Official Product of the 2009 International Year of Astronomy. Ideal astronomical entry level telescope. The FirstScope Telescope pays tribute to Galileo Galilei and may of history’s most notable astronomers and scientists. We honor these men and women for their contributions bringing us one step closer to understanding the universe around us. The compact design makes it easy to take with you on your next outdoor adventure. The FirstScope is also stylish enough to be used as a decorative fixture on your bookshelves or desk.

Very nice entry level beginner telescope and very suitable for children. And at a very reasonable cost. Comes with two eyepieces and a barlow lens.

Celestron 21061 AstroMaster 70 AZ Refractor Telescope – The AstroMaster Series produce bright, clear images of the Moon and planets. It is easy to see the moons of Jupiter and the rings of Saturn with every one of these fine instruments. For views of the brighter deep space objects like galaxies and nebulae, we recommend the larger aperture and light gathering ability of the Newtonian reflectors. If you’re looking for a dual-purpose telescope appropriate for both terrestrial and celestial viewing, then the AstroMaster Series is for you. Each AstroMaster model is capable of giving correct views of land and sky.

Celestron 127EQ PowerSeeker Telescope – Celestron PowerSeeker telescopes are a great way to open up the wonders of the Universe to the aspiring astronomer. The PowerSeeker series is designed to give the first-time telescope user the perfect combination of quality, value, features and power.

Amateur astronomy is a great family hobby that can be enjoyed year round, and Celestron’s PowerSeekers are the ideal choice for families looking for an affordable and high quality telescope that will provide many hours of enjoyment for children and adults alike. PowerSeekers are quick and easy to set up – even for the novice. No tools are required for assembly! Their sturdy equatorial mounts are perfect for tracking objects in the night sky, and the collapsible alt-azimuth mounts are perfectly suited for terrestrial (land) viewing as well as astronomical use. All of Celestron’s PowerSeekers include a full range of eyepieces plus a 3x Barlow lens that provides an increase in viewing power hundreds of times greater than that of the unaided eye! PowerSeekers are designed and manufactured using all fully coated glass optical components with high transmission coatings for enhanced image brightness and clarity. Erect Image Optics are ideal for terretrial (land) and astronomical (sky) use.

Celestron Nexstar 60GT 60mm Go-To Refractor Telescope – The Nexstar 60GT is Celestron’s most affordable computerized telescope. For a surprising price, you get a complete telescope with three eyepieces (and a finder), an adjustable tripod, and a computerized tracking system with a database of 4000 objects. With the help of the well-illustrated manual, it takes only minutes to assemble the Nexstar 60GT and connect the batteries or optional AC adapter . Nexstar’s “quick align” feature allows me to track bright objects like the moon and planets right away, but to get the most out of the tracking system the computer needs to be oriented to two bright alignment stars. Celestron includes some basic star charts, but if you don’t already know a few constellations, you’ll want a guide book like Nightwatch or a magazine like NightSky to introduce you to the bright alignment stars by name.

The NexStar 4 SE features computerized finding and tracking of nearly 40,000 celestial objects, no-tool setup is easy, and planetarium software for your PC is included.

The NexStar 4 SE delivers great views of the Moon, the planets, and bright deep space objects. The standard equipment 25mm E-Lux plossl eyepiece gives a magnification of 53X, enough to see the Lunar disk, Saturn’s rings and the major cloud bands on Jupiter. It’s easy to add optional eyepieces to zoom in for more detail. Using a 12.5mm X-Cel eyepiece for 106X magnification I can see several cloud bands on Jupiter and I can even pick out the small dark shadow as one of Jupiter’s moons passes in front of the planet. On a good night I can push the magnification up to 230X with a 6mm plossl eyepiece while viewing the Moon and planets.

The NexStar 4 SE package also includes a sturdy adjustable tripod, a motorized alt-azimuth mount, and the NexStar hand held computer controller. I don’t need star charts or a GPS reciever to operate this telescope. Celestron’s patented SkyAlign procedure is easy to use, and experienced users will like the two-star align and solar-system align options because they are even quicker to set up. The steel tripod and alt-azimuth mount provide a solid base for the NexStar 4 SE. Vibration is not a problem, even while focusing at high power. The computerized tracking is also very good, easily keeping planets in the field of a high power eyepiece. The disadvantage of a computerized scope, of course, is battery consumption. I find that rechargeable NiMH batteries work very well in the NexStar 4SE; a set of batteries lasts all evening and I don’t need to worry about electrical cords getting tangled in the dark.

Portability and serious performance come together in the NexStar 6 SE. Celestron’s first new Schmidt-Cassegrain optical system in over a decade is now available in a high performance altazimuth computerized telescope. With a total weight of 30 pounds including the tripod, the ultra portable 6 SE features a precision optical system with 1500mm focal length (f10) and offers 44% more light gathering than a 5-inch telescope.

The NexStar 6 SE has all the same features as Celestron’s most advanced computerized GoTo telescopes, including our revolutionary SkyAlign alignment technology, a sky tour feature, a database of over 40,000 celestial objects, and easy-to-use hand control.

Plug the optional CN-16 GPS accessory into NexStar’s auxiliary port and download data from orbiting GPS satellites for truly quick and easy alignments. The universe may be full of mysteries, but using the NexStar 6 SE isn’t one of them.

Whether you are a seasoned astronomer looking for a portable scope with advanced features, or just starting your astronomy adventure and looking for an easy way to enjoy the night sky, a NexStar SE will help you take a closer look.

Every NexStar SE includes a version of The Sky software Level 1 Planetarium software for exploring the Universe on your PC and printing out custom star charts of the sky. In addition, you receive our NexRemote software that allows you to operate your telescope via your PC. This software package, valued at over $100, is included free with your NexStar SE!

The Nexstar 8 SE upholds Celestron’s reputation for quality optics. When I use an 11mm Plossl eyepiece (almost 200x magnification) for example, I can easily see the Cassini Division in Saturn’s rings. When I look at Jupiter, the pale orange color of Jupiter’s famous Great Red Spot is visible, and I’ve even been able to identify the polar caps and spot dust storms on the planet Mars. A 20mm Plossl eyepiece (about 100x magnification) is a good choice for viewing galaxies and star clusters. When I look at globular cluster M13 in the constellation Hercules the high contrast XLT optics show me a glowing snowflake made of hundreds of tiny pin-point stars! And a low power 32mm Plossl eyepiece is a good choice for views of larger deep space highlights like the Andromeda Galaxy and the Orion Nebula.

Celestron CPC 1100 StarBright XLT GPS Schmidt-Cassegrain 2800mm Telescope with Tripod and Tube The CPC GPS is the most portable of Celestron’s top-of-the-line fork-mounted astronomical telescopes. This telescope is at home as a superb visual instrument or, with optional wedge and CCD cameras, as a serious astrophotographer’s tool. Turn this scope to planets and see amazing detail on the surface of Jupiter; see Cassini’s Division in the rings of Saturn, and resolve details on the surface of Mars. Even the distant Uranus, Neptune and Pluto are within your reach. Although large in aperture, with its conveniently located carrying handles and an instrument weight of 65lb., this telescope is portable enough to setup in your backyard or take with you to your favorite dark sky location. The largest aperture of the CPC GPS line, The CPC 1100 GPS Schmidt-Cassegrain telescope has the most light gathering power and has a limiting magnitude of nearly 15. The CPC 1100 GPS takes full advantage of its vast database of thousands of NGC and Abell galaxies as well as delivering a new level of detail to all your favorite deep sky objects. This CPC 1100 GPS features Celestron’s premium StarBright XLT coatings.

With sophisticated software features like Hibernate function, the CPC can maintain its star alignment night after night without needing to be re-aligned, making it an ideal instrument for a permanent observatory facility.